Just added to your cart

What is PM2.5 and why you should care

Size Matters
More on that size. Microns are tiny. Here’s an idea of how small microns are compared to human hair: Health Effects of PM: Since they are so small and light, fine particles tend to stay longer in the air than heavier particles. This increases the chances of humans and animals inhaling them. Owing to their minute size, particles smaller than 2.5 micrometers are able to bypass the nose and throat and penetrate deep into the lungs and some may even enter the circulatory system [1].

Studies have found a close link between exposure to fine particles and premature death from heart and lung disease. Fine particles are also known to trigger or worsen chronic disease such as asthma, heart attack, bronchitis and other respiratory problems.

A study published in the Journal of the American Medical Association suggests that long-term exposure to PM2.5 may lead to plaque deposits in arteries, causing vascular inflammation and a hardening of the arteries which can eventually lead to heart attack and stroke. Scientists in the study estimated that for every 10 micrograms per cubic meter (μg/m3) increase in fine particulate air pollution, there is an associated 4%, 6% and 8% increased risk of all-cause, cardiopulmonary and lung cancer mortality, respectively.

The Airmask series 1™ was crafted to fit comfortably around the contours of your face while reducing moisture, heat, carbon dioxide buildup, irritation and your glasses getting foggy. That means you spend more time in the moment and less time worrying about the elements. Click here to learn more about Neo Cloths New AirMask Series 1™. Our filters reduce the amount of PM2.5 that can enter your mouth and lungs, ensuring you are protected while you live your best life. The first layer of non-woven fabric filters out dust and dander. The second layer helps to catch pollutants from automobiles and second-hand smoke. The third layer houses our activated carbon filter. Carbon filters remove contaminants through adsorption. Absorption soaks up particles like a sponge to water. Adsorption adheres particles to a surface like a piece of Velcro. Organic compounds bond or stick to the surface of a carbon filter. Carbon filters also help eliminate unpleasant odors so your air remains fresh. Finally, the fourth and fifth layers provide additional protection from small, harmful substances.

How Else Can I Reduce My Exposure to PM?

You can use air quality alerts to protect yourself and others when PM reaches harmful levels:

AirNow: Every day the Air Quality Index (AQI) tells you how clean or polluted your outdoor air is, along with associated health effects that may be of concern. The AQI translates air quality data into numbers and colors that help people understand when to take action to protect their health. 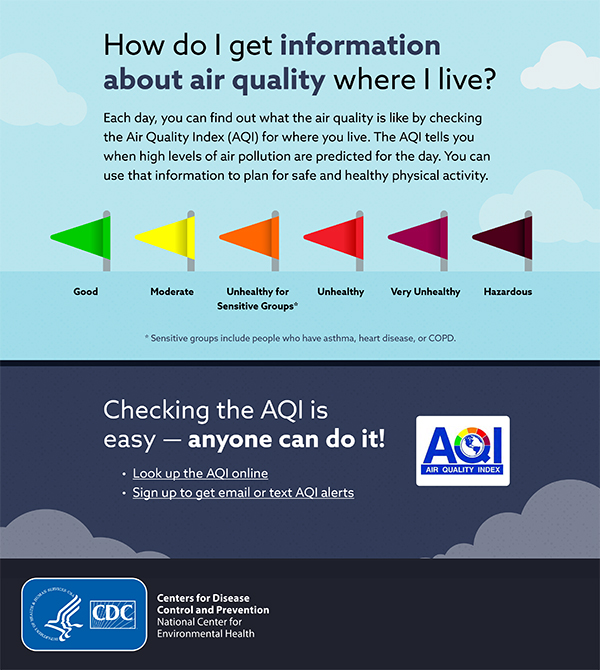